No comments to show.

The last three years have been, to put it mildly, weird. And the latest data on used vehicle values from iseecars.com shows that we’re still in a deeply strange historical moment. Not only has depreciation on used vehicles dropped significantly, it has reversed on at least five vehicles.

The company released data gathered from analyzing three million three- and five-year-old vehicle sales and found that depreciation is slowing down. Due to the pandemic and the production difficulties created by it, the average three-year-old vehicle lost just 16.9 percent of its value by 2022. In 2021, the average vehicle had lost 23.8 percent of its value after three years.
So scarce were used vehicles, that some lucky customers who bought a car new in 2019 may have actually seen the value of their vehicle increase. And the vehicle that appreciated the most was the Porsche 911.
Read: Someone Paid $130,000 For A 50-Mile 2022 Bronco Raptor That Was Worth $80,000 New

Buyers of the rear-engine sports car gained an average of $11,373, or 5.7 percent, on their vehicle‘s value if they tried to sell it today. Porsche 718 Cayman buyers, too, gained, though less. Their vehicles’ values grew by just 1.8 percent ($1,342), according to iseecars.com.
Along with the Porsches, the values of the Jeep Wrangler and its four-door counterpart, the Wrangler Unlimited, grew by 0.3 and two percent, respectively. Finally, it was the fuel-efficient Toyota RAV4 Hybrid that had the second-most appreciation over the last three years, with values rising by 2.5 percent.
“This is unprecedented in used vehicle pricing. Finding multiple 3-year-old used models worth more than their new MSRP is something we’ve not seen before,” remarked Executive Analyst Karl Brauer. 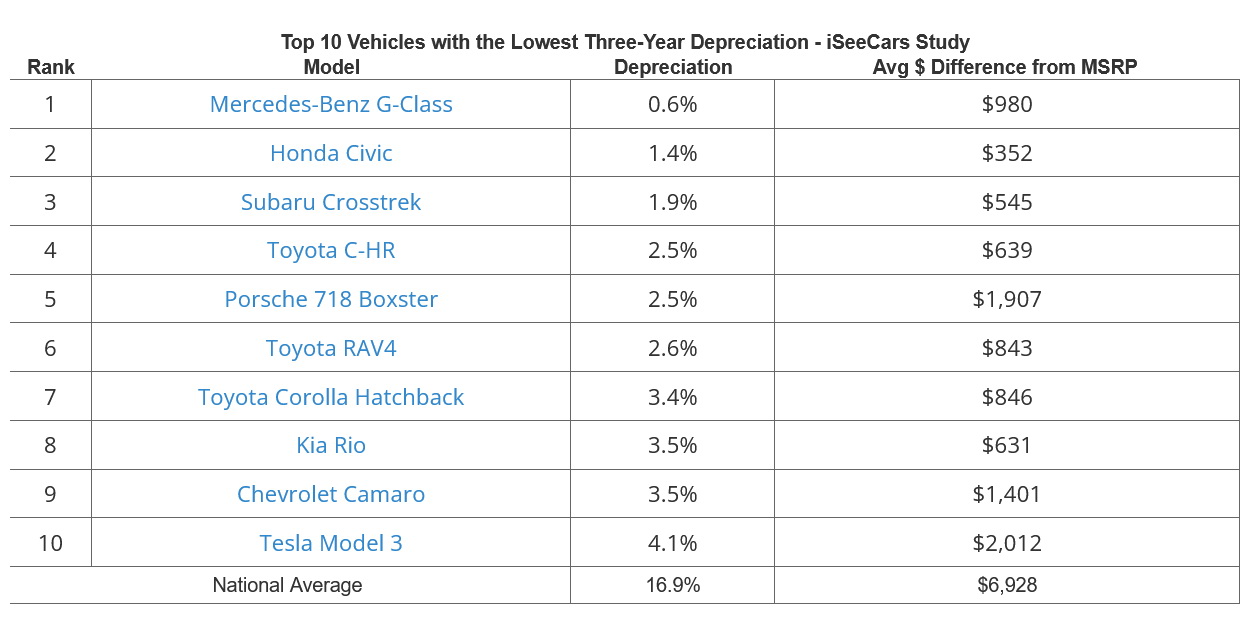 Depreciation was so low over the last three years that the buyers of several other vehicles saw their values drop so insignificantly that they have lost the equivalent of just a few hundred dollars over that time. Vehicles like the Mercedes-Benz G-Class, the Honda Civic, the Subaru Crosstrek, and others depreciated by less than five percent, and less than $1,000 between 2019 and now.
Even over the last five years, depreciation has been low. On average, vehicles purchased in 2017 have lost just a third of their value. That’s 17 percent less depreciation than the market saw in 2021.
The five-year-old vehicle that held onto its value the best in 2022 was the Jeep Wrangler and its four-door counterpart. Again, the Porsche 911 held onto its value well, while other sports cars, like the Ford Mustang, the Chevrolet Camaro, and the Subaru BRZ were all among the best performing second-hand vehicles on the market.